Enemies (also commonly called biters) are creatures that want to harm the 玩家. They are the native inhabitants of the extraterrestrial world in the form of arthropods living in organic nests, coexisting with each other peacefully. They are encountered in three species: Biters, spitters and worms. The species are further distinguished in four stages of growth, and thus strength. Enemies and nests show up on the map as red dots. Much like the player, enemies can slowly regain lost health.

Enemies are directly connected to the following achievements:

Biters are one of two main antagonists in the game. They come in four sizes: small, medium, big and behemoth. In the beginning of a game, there will only be the small ones. With increasing 污染, they will become bigger, related to the enemy's 进化. As common sense may suggest, their method of attack is a straightforward charge to "bite" things.

Spitters are much like biters and only appear slightly later on in the game as the evolution factor increases. Their main difference from biters is their ranged attack. Using predictive aiming, they spit a stream of acid at enemies which leaves behind a puddle of acid where it hits the ground. Due to the spitters' predictive aiming, the acid stream can be dodged by suddenly changing walking directions or standing still.[1] Both the stream and the puddle of acid deal damage of time and slow down players and vehicles. Most entities of the game have a much lower resistance to acid than other damage types (including turrets and armor), so spitters are effectively more potent against the player and his factories. Their behaviour and size classification are the same as with biters, but their health is universally lower and they are resistant exclusively against explosives, with no physical resistance.

The Worms are natural allies of biters and spitters and will attack the player if they get close enough with an attack similar to spitters'. They act like static turrets and will not follow attackers. They rely on high damage, great range and splash damage to keep the player away from the worms and the nests they protect, but either one of these advantages can be overcome. Unlike other enemies, they are also highly resistant to fire. They will spit acid at the player, which can also leave acidic puddles on the ground that can still damage players and vehicles, as well as slow them both down and leave a brief acidic, damaging effect for a few seconds. However, placed buildings and tiles are unaffected by the acid puddles, but still take damage normally by the acid projectile.

Worms come in 4 sizes, their power increasing with size. Like biters and spitters, behemoth, big and medium worms spawning is influenced by the evolution factor. Worms are only created during enemy expansion when a certain evolution factor requirement is fulfilled. This is 0.3 for the medium worm, 0.5 for the big worm and 0.9 for the behemoth worm. Below these evolution factors, worms can only be created by the map generation. In map generation, the game restricts higher tier worms behind the distance from the starting point. The further away the player goes from the starting area, the stronger the worms become.

The spawn points of biters and spitters. While nests themselves are generally defenseless, the enemies they release over time effectively serve as a form of guards to distract the player and any nearby turrets, and are often accompanied by worms. Nests exposed to pollution will use it to send enemies to join attacks. Enemies not engaged in combat may seek out the nearest nest for protection.

The nests are highly resistant to fire and otherwise generally more resilient than a medium worm.

Every 4-60 minutes, a group of 5-20 biters/spitters will leave their base to create a new base which will consist of as many worms/nests as there are members in the group. This group will search for a suitable spot that's 3-7 chunks away from existing bases. The interval between enemy expansions is global, and the higher enemy evolution, the shorter the interval is on average. Furthermore, with higher evolution, the groups are bigger on average.

Nests spawn biters and spitters "for free". However, biters and spitters will only aggressively engage the player's factory if the pollution cloud of the factory reaches a nest because pollution is consumed to send biters or spitters to join the next attack. Every 1 to 10 minutes (random) the mustered biters launch an attack. If not all biters have arrived at the rendezvous point by that time, they will wait up to an additional 2 minutes for stragglers. The attack then proceeds to their target over the shortest path possible, accounting for terrain, but not for player entities that could pose an obstacle (like walls).

If there is a clear path somewhere around those obstacles, the biters will attempt to go around. If there is no clear passage or a clear passage would mean deviating too far from the original course, the biters will attack whatever is in their way to go through. This can be exploited to an extent; creating mazes at regular intervals along a barrier can direct the biters through a gauntlet not dissimilar to tower defense.

However, if a biter comes in proximity of a military unit or structure, it will prioritize these and attempt to immediately attack them instead, again trying to reach the new target over the shortest possible path with no too great detours, if possible. 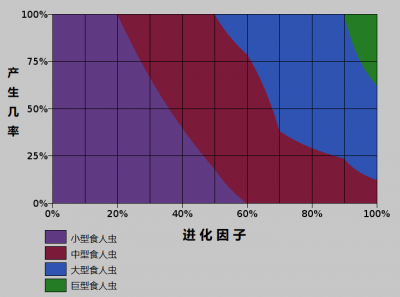 Spawn chances of biters from biter spawners by evolution factor. 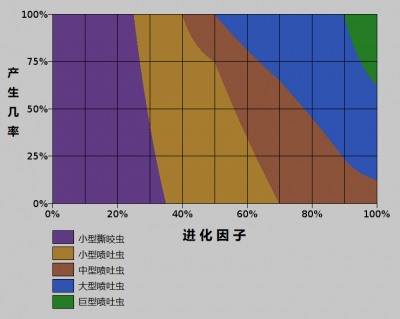 Spawn chances of spitters from spitter spawners by evolution factor. 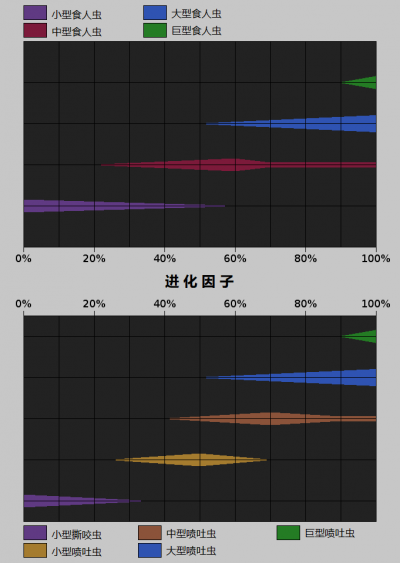 Weight graph of both spawners by evolution factor. The values shown are primarily for indicating when certain types start and stop spawning, for actual chances refer to the tables or other charts.

The evolution factor is a global variable that determines what kind of biters will be spawned. You can check the variable in the dev console via the following command (does not disable achievements):

Besides choosing what kind of biter will be spawned, the evolution factor also influences the spawning interval. This interval (spawning_cooldown in the enemy-spawner definition) is interpolated between 360 (0 evolution) and 150 (1 evolution) game ticks (= 6 to 2.5 seconds).

The evolution factor is increased by three kinds of events:

All these values are set in game.map_settings.enemy_evolution. From there they can be changed or modded.

The default settings are:

Pollution production is the total pollution produced by buildings per tick, not the pollution spreading on the map, so it is not reduced by trees or other absorbers. e.g. : 10 boilers produce 300 pollution in one minute, raising the evolution factor by around 0.027%.

The percentages are applied on the base of 1 - current_evolution_factor. So for instance destroying enemy spawners in the beginning of the game results in increase of evolution factor by 0.005 (half a percent) while doing this when the evolution factor is 0.5 the increase is only 0.0025 (quarter a percent).

This also means that the evolution factor approaches 1 asymptotically - generally, increases past 0.9 or so are very slow and the number never actually reaches 1.0.

The probability charts show the chances of each type of biter/spitter for each spawner at all evolution levels. 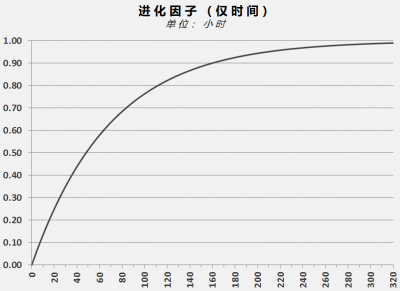 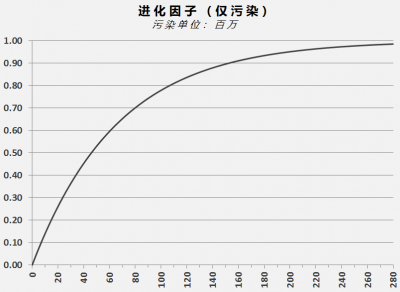 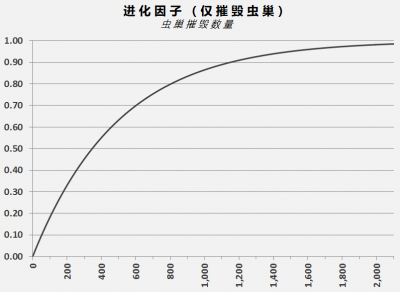 These charts (click to enlarge) represent the situation where each evolution factor component (time, pollution, destroyed spawners) is the only component contributing to the evolution factor in that entire game. They are therefore not realistic, as in a typical game all three components will contribute, some at varying times and intensities.

Because of how contributions to the evolution factor (hereinafter, EF) are calculated (multiplied by (1 - current EF)), it is not possible to simply add the values indicated by these charts for a game's time passed, pollution generated, and / or spawners destroyed so far to retrieve the total evolution factor.

However, the evolution factor will always be less than the sum of all individual components as indicated by these charts, and at least as high as the highest individual component. Thus, using the values from above, the EF will be at least 0.35 and less than 0.85. A smarter approach is required to compute the amount of pollution released.

A key observation in understanding where this formula comes from is that each increpmental change of the evolution factor is effectively a multiplication of 1 - EF by a constant (depending on the nature of the change). For example, an other way of saying that killing a biter nest augment evolution by 0.2% of 1 - EF, is to say that killing a biter nest multiplies 1 - EF by 0.998.

So like multiplication, evolution is, barring rounding errors, associative and commutative. The commutativity means that the order in which you make actions increasing evolution do not matter, and along the assossiativity grounds the formula above.

That knowledge can also be applied to compute the above charts exactly, or to compute a component of evolution without having to refer to the chart at all. For example, pollution as a function of time only is 1 - 0.999996 ^ t where t is the time in seconds.

This formula can also be used to estimate impact of future player activities on the EF : a set of actions that is known to bring the evolution factor of a world from 0 to EF(2) (eg using the above chart and formula) will bring it from EF(1) to 1 - (1-EF(1)) * (1-EF(2))