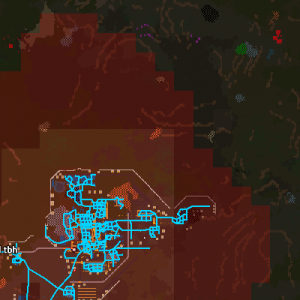 Example of in-game pollution (red squares) in the map 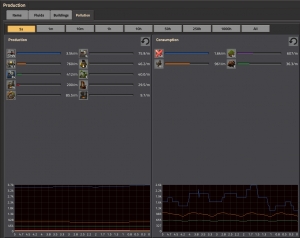 Pollution tab in the production GUI.

It is produced by many buildings involved in processing items and spreads outwards at a steady rate.

The 进化因子 is not increased by the spreading/absorbed pollution, but by the pollution produced by all the player's machinery at every tick. This means that no matter how hard the player tries to contain the pollution, 敌人 will still evolve at the same rate. They just won't attack the player as frequently. The pollution cloud is used to trigger biter attacks and determines the size of the attacks.

Pollution settings can be changed via map generation settings, or can be disabled entirely.

As soon as a chunk has reached 15.0 pollution it starts spreading in all four cardinal directions at a rate of 2% per game-second (60 ticks). Pollution can generate new chunks if it needs to spread to them.

Pollution attracts biters to the Player's factory. Biters who find themselves in a polluted area will attempt to reach the source of pollution and destroy it.

If a chunk's pollution is greater than 20, each enemy spawner absorbs 20 + 0.01 * [chunk's pollution] every game second (60 ticks), otherwise it absorbs 3 times the amount of pollution needed for the most expensive unit it can spawn for the current evolution factor.

Higher pollution values decrease the time it takes for biters to join the attack force. After a certain amount of pollution is absorbed the spawner sends one of its biters/spitters to a rendezvous point. Every 1 to 10 minutes (random) the mustered biters launch an attack. If not all biters have arrived at the rendezvous point by that time, they will wait up to an additional 2 minutes for stragglers.

Required pollution to add an additional biter/spitter to the attack wave:

These tables contain information about the levels of pollution produced/absorbed by items in the game.

Fire on the ground and burning trees produce 0.005 pollution per second.

If a chunk's pollution is greater than 20, each enemy spawner absorbs 20 + 0.01 * [chunk's pollution] every game second (60 ticks), otherwise it absorbs 3 times the amount of pollution needed for the most expensive unit it can spawn for the current evolution factor.

Every chunk has a natural absorption rate per second which is determined by the sum of the pollution absorption of its floor tiles.

Following numbers are the pollution reduction for a single tile per second.

Every single tree absorbs a small amount of pollution in its chunk per second. If the total pollution in a chunk is above 60 units, once per second some of the trees in that chunk each have a chance to either lose one stage of leaves or have their leaves become one stage more gray. Regardless of whether the tree loses leaves or gets grayer, 10 pollution are absorbed by the tree.
A tree stops losing leaves/becoming more gray once the sum of its gray percentage and its leaves lost percentage is above 120%. As the grayness and leave stage are then locked for that tree forever, it is possible for trees to keep some leaves in heavily polluted chunks but in turn be very gray, or the other way around.
The less dense the leaves, the slower the tree absorbs pollution, however tree grayness does not affect pollution absorption.

Pollution is directly connected to the following achievement: