As a minimum a manually operated railway has to consist of:

Locomotives can be entered and then manually operated by standing next to them and pressing the 回车键 button.

An example of a safe railway crossing.

Be careful when crossing tracks! Trains are one of the highest damaging entities in the game, and will kill most players instantly on contact.

A safe railroad crossing like the example shown in the picture can be built. This works by restricting access to the tracks when an oncoming train has the rails reserved. When the player is on the rails, the signals are reserved by the circuit network, and the train must stop and wait until the player leaves the tracks. When a player is inside the area crossing the tracks, the train gates are closed so the player can't get on the tracks outside the crossing. This is to completely ensure a safe crossing, and is often used on servers.

Placing a Cargo wagon so it is attached to the train.

Train stations are the only place where trains can be loaded or unloaded when they are in automatic mode. Cargo wagons can be filled or emptied by up to twelve adjacent inserters (six on each side). Inserters can also be used to insert fuel into locomotives. Pumps are used to transfer fluid into and out of fluid wagons, only three pumps can attach to one fluid wagon at once.

Rail signals are used to employ multiple trains automatically without the danger of trains crashing into each other. Rail signals split the network into blocks and ensure that only one train can be in every block at any time. Note that driving a train manually ignores all signals; so it is possible for automatic trains to crash into the player if the player ignores red/yellow signals. Always beware of automatic trains and give them the right of way. 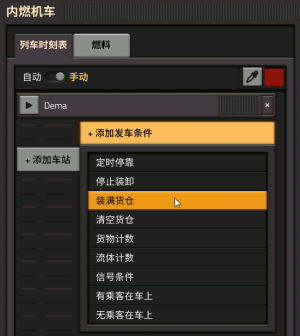 The wait condition tab in the locomotive's GUI.

Trains set on "Automatic" choose their destination stop and route on departure, and after waiting at a chain signal for five seconds, and when their destination stop disables itself by circuit condition. They choose the shortest route using a path finding algorithm that will get them to an enabled train stop with the right name, taking penalties for any apparent-at-the-time delays into account. If no such train stop exists they will skip the stop and go on to the next.

This section covers items used to make trains automatically transport items between stations. The player should be familiar with creating a rail system.

First, the player has to setup a rail system with at least two train stops, which are placed in the right-hand side of the expected train arrival direction. By hovering over the train stop with the mouse you see the positions of the vehicles for better setting up the train station (including (un)loading machinery, refueling/repair installations).

When you set up the train schedule (see below) and fuel the train, you can start the train on it's schedule by switching from manual to automatic driving mode.

The player can set up a list of train stations in the left locomotive's GUI. The train will route to stops in the given order, if it's at the end it will continue with the first. Stations can be added by clicking "Add station" in the GUI. A pop-up appears with a list of all stop names. If one is selected, another button appears which allows select a wait condition from a pop-up list. Furthermore, the map in the right part of the GUI can be used to add stations to the schedule by using SHIFT + 鼠标左键 on a station or using CTRL + 鼠标左键 near a rail in the map to create a temporary train station.

It is also possible to set no wait condition, this causes the train to simply pass by the station without stopping.

If more than one term is added, it is possible to change the connection of those using the logical operators AND and OR. An AND condition will result in true if all terms are true. An OR condition will return true if at least one of the terms is true.

When mixing AND and OR terms, the logic is grouped by the OR terms. When evaluating the wait condition, the first term is evaluated along with all AND terms immediately following up to but excluding the next occurring OR term. If they all evaluate true, the wait condition evaluates true. Otherwise, evaluation continues with that next occurring OR term and all AND terms immediately following it, up to the next OR term. This continues until either an OR group evaluates true and the wait condition is satisfied, or all terms have been checked.

Wait until full, up to 30 seconds:

Wait until empty, and 30 seconds passed, and 5 seconds of inactivity:

Wait until iron ore is low, or copper ore is low and at least 30 seconds passed:

Factorio's wait condition logic is read as disjunctive normal form (DNF), and so this last example is processed as (note the parenthesis):

Which is the same as this:

Unfortunately, there is no way to write that shorter form in the current UI.

Below are some things to verify if a rail system or train is not working.

When trains cannot reach the target, a "no path" symbol pops up over the locomotive. Check:

If you are still having problems, consider:

A pictorial summary of typical problems.