This gif shows how robots can load or unload chests in a train station. The train delivers items that are filled into active provider chests and then put into the requester chests to be loaded onto belts. Logistics robots are ideal in train stations, since very high item throughput on a short distance is needed. Click here for a larger image.

The player character can also act as requester chest in the logistic network, allowing them to 'request' various items be kept at a set limit within their personal inventory. After researching Character logistic slots, they can configure an amount of items; and logistic robots will start to move the specified items from the network to the character's inventory.

(1) Default capacity is 1 item per robot. This can be increased by researching Worker robot cargo size (research).

(2) Logistic chests can also be connected to the circuit network with red wire or green wire.

To start with, just use passive provider- and requester chests. Place the passive provider chests at the output inserters of assembling machines and requester chests at the input (let them request the needed items). Place a roboport, which covers these chests with the inner orange area. Place some logistic bots in the roboport. The robots will fly out of the top hatch and will begin to work. You can now limit the number of produced item with the stack limitation-feature.

The logistic network makes it possible to create complex items in a relatively small factory area, but its throughput is limited by how many robot charge points (roboports) exist in the network. 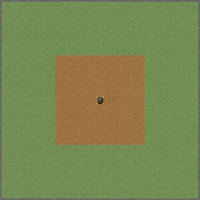 The basic thing needed for item transportation is roboports. The roboport shows the orange logistic coverage and the green construction coverage when held in the cursor or hovered after placing.

There can be many separate logistic networks. Two roboports are in the same network only if they are connected, so if their logistic areas are touching. Visually this is represented by a dashed yellow line connecting them. To prevent roboports from linking, the player needs to build them far enough away from each other so that the orange zones don't touch.

Bots do not fly migrate from one network to another, unless their home network is destroyed in some way, for example when all roboports are removed or out of power.

Worker robots are a priority target of biters, and the enemies will prioritize attacking them over many objects in the vicinity of the robots.

Robots may run out of charge on longer journeys which will reduce their flying speed to 20% of their normal speed. Robots that run out of charge will fly to the closest recharge point instead of their original target. This means that they may depart from the original route and even go into the opposite direction, depending on where the closest charging point is.

When the charging-queue for the bots gets too long, the bots (and their loads) will slow down. Generally, a roboport can charge between 50 and 70 bots per min, 4 at a time, but are not very efficient at charging large queues of bots and can quickly become overworked.

It is possible to notice negative numbers on the 'Logistic Network'-Screen when looking at network storage or opening the logistic networks GUI the with 模板:Keybinding.

The logistic network numbers report items in provider and storage chests, minus the amount of items scheduled to be picked up by robots. When negative numbers are shown, it means that more items are being requested than are available in the network. There is a deficit. This can be a problem, or intended, depending on the player's choice. The negative value is just to explain why items aren't being delivered. For example, a deficit of 20 iron plates would look like this:

The delivered number of items in the requester chest can be higher than requested. This depends on the researched Worker robot cargo size-bonus, since bots will always take as much as they can carry if an unlimited amount is available.

Normally a robot flies to the nearest roboport to recharge. If the queue on that roboport is too long, they eventually choose another port. This is specified by the ratio of <distance to different roboport in tiles> / <queue size of robots waiting>.

Currently, to choose the more distant roboport, the distance must be at most <Number of robots in the queue and on the way> / 2. So, to choose a roboport that is 10 tiles more distant, it has to have 20 less robots waiting in the queue.

This overview reflects the priorities in which order the chests are filled/emptied.

Logistic robots on the logistic network look for orders by the chests in this order:

(1) Requesters with "request from buffer chests" have higher priority than others, the same as a player.

(2) Storage does not "request" items on its own. It receives actively discarded items from a) active providers, b) player trash slots, c) deconstruction, and d) robots that have their orders cancelled while carrying items. Storage is the last priority, and receives only items that have nowhere else to go.

When looking to pick up requested items from multiple chests of equal priority, bots will always choose the closest one. [2]

This is however only true when an item is being requested, not when an item is sent away via player trash slots or active provider chests. In the case of items being sent into the logistics network, distance does not matter, instead when chests have the same priority, for example two active provider chests, the bots will alternate between the chests in a round-robin fashion.