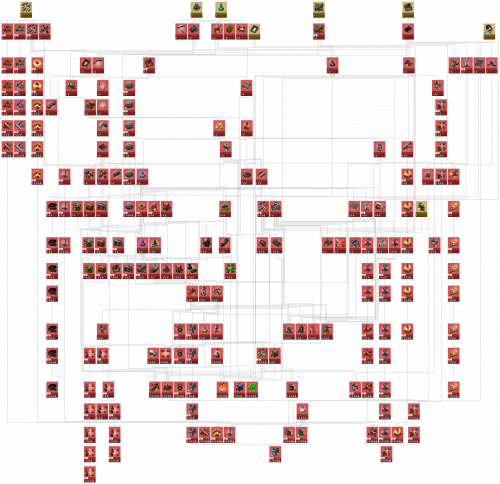 While most technologies in Factorio are either one-off or have a finite, relatively small number of levels available, a few are "infinite", meaning the player can research as many levels as they can afford. All of them unlock bonuses to existing technologies, never new structures or abilities. The per-level bonuses are constant for a particular infinite technologies and, like finite research bonuses, are additive within a single technology. They are subject to diminishing returns; thus, the per-level and per-science pack contributions from very high levels of infinite technologies will eventually provide only marginal improvements.

All infinite technologies levels require space science packs, and are also the only technologies that do. As such, they are late-game technologies intended primarily for players who wish to continue playing and expand their factory past the nominal victory condition of launching a rocket.

Infinite technologies are identified in-game by a small ∞ infinity symbol shown in the top right corner of the research technology's card in the research screen.

Most infinite technologies are continuations of ordinary multi-level technologies; the "infinite" mechanic becomes effective once the player reaches the card initially labeled with N - ∞ in the research tree. Only the two artillery-related technologies (artillery shell range and shooting speed) are infinite-only; for these, 1 - ∞ is shown before any levels in them are researched. In either case, once the first infinite level is researched, the card label switches to the one discussed above.

As the price of most infinite technologies (specifically, those based on geometric progressions) increases very steeply, it may be a good idea for players to set realistic target levels for each of the infinite technologies they wish to pursue, and make their factory plans accordingly. To that end, the following properties of cumulative infinite research prices may be useful:

Note that these prices reflect research units, which will not be equal to science packs if productivity modules are used in labs. (In that case, the science pack requirement will be lower.)