工具 One magnet and two tanks

Tools: One magnet and three nitros

Tools: Infinite magnets, one nitro and one girders

Buildings: One EEF HQ and one boat with tools

Tools:  One nitro and infinite grabber

Buildings: One four floor building and one big TV

Buildings detached from the ground float, and small detached blocks will be destroyed by space. The rocket man, thrusters, and missile launcher are used only in space, the Rocket man and thrusters only being able to be used in space. The player can see space in the background as well as the earth.

Buildings: One plus building

Larry: I'M SO HAPPY TO SEE YOU GUYS! I MISSED YOU SO MUCH!

Boss: Larry. Strop frolicking and get us down from here. You know you're not allowed on top of any high structures.

Boss: It was our pleasure sir. I'm glad we did the job without damaging TOO many of your satellites.

Dancer: What does he mean by "not too many"?

Man: Wait. Is that why I can't see the Egg Network TV anymore?

Gymnast: My cellphone is, like, not working. I can't even text!

Lady: I drove my car off a cliff because my GPS isn't working anymore! Grrrrr!

Along with tools from the past two games some new tools were introduced.

The name of the "second winter game" Nitrome mentioned in previous posts was revealed to be a Rubble Trouble game. The game is said to be released next week (between December 18th and 24th). Nitrome revealed an image of the game, and also told fans they could try to guess where the game would take place on their Facebook and Twitter pages. 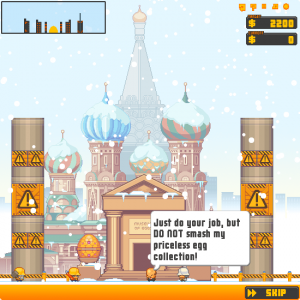